Having trouble setting up death counter

Okay, I have looked over numerous forum questions on this same thing and I still can’t seem to figure this out. I’m not very tech savy, so I really need this broken down by what I specifically put in each box when making a custom command.

I have experimented with a number of different command combinations, following advice on this forum and I have not been able to figure it out. Here what I have tried and how it shows up in the chat.

Here are the results: 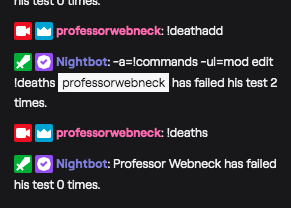 What am I doing wrong? Again, when answering, can you please tell me what I have to put in each exact box when making a custom command on its own line and only what is supposed to go into that box.

You were close to getting it right. I understand you add the commands from the dashboard.

The -ul=, -a=, and -cd= parameters are to be used only if you add the commands from the chat, if you use the dashboard to add new commands you have to fill the boxes corresponding to each parameters: 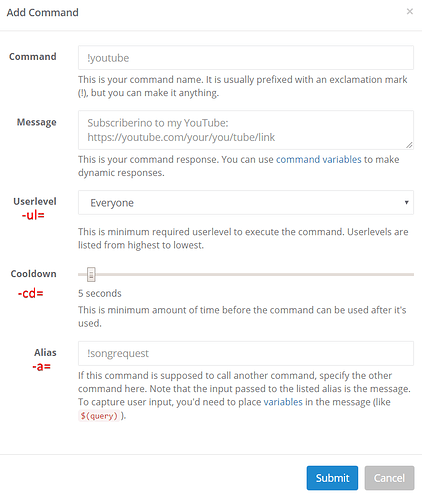 Then !commands add, !commands delete, and !commands edit can respectively be shortened to !addcom, !delcom, and !editcom.

So for your commands this is how to fill each fields:
• !deaths:
Command: !deaths
Message: Professor Webneck has failed his test 0 times.

Now, if you wanted to add each commands from the chat, here is what to type:

Thank you so much for the help. I greatly appreciate it. That has solved the problem, but not exactly, as I would like.

So, when I enter !deathadd through my chat I get this: @professorwebneck -> The command “!deaths” has been edited successfully.

I would just like it to provide the new count within the message Professor Webneck has failed his test on (game) X times.

Is there was a way to do that without having to then type in the !deaths command to find the new total or no? Thank you so much for the help.

Sadly there isn’t, I too wanted to have that kind of thing, but you’d need to call !deaths as an alias, and since !editcom already is one, this isn’t possible: a command can only have one alias, and an alias command can’t have an alias, in order to prevent loops.

Thanks for all your help. I greatly appreciate it.