BTTV Menu not showing up in settings?

I’m not sure when this happened because I haven’t had a reason to mess with my BTTV settings, but I noticed today that the options menu for BTTV on Twitch is just gone. Using the extension menu on Chrome, the option to go to the Options is also grayed out. I literally cannot access the settings menu. BTTV emotes are still working on the site, I just can’t access any of the actual options to change other things.

Has anyone else had something similar happen?

I should also say that the Emote Menu for BTTV is there, but none of the actual BTTV options show up in the gear menu next to it. Nothing to bring up the Settings menu, and none of the other options. I’ve also cleared my cache and refreshed, didn’t fix the problem.

That makes me think that it’s something that just happened today. Apparently FFZ just updated today, but that wouldn’t explain it breaking because I tried it with FFZ disabled and it still doesn’t show up.

Did you just update Chrome today? That’s the only thing of note that I can think of. There was a very brief power outage that ended up causing the computer to reboot, and as a result Chrome updated (an update showed up a few days ago but I hadn’t gotten to it yet), and that’s when I noticed.

(Just as an aside, Chrome also now suddenly uses twice as much RAM with extensions as it did before the update. I think it may just be a Windows 7 issue because I found a thread where the common factor was that we had Windows 7. Probably doesn’t have anything to do with this. I’ve had Windows 7 on this computer the whole time and never had an issue with BTTV.)

Can you send a screenshot of what it looks like? I can’t reproduce the issue.

That’s what it looks like when I click the gear under the chat. BTTV Settings is also missing in the dropdown menu when you click your avatar at the top right of the screen. 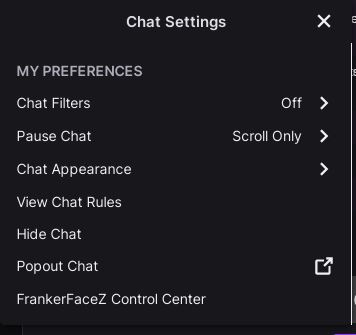 I am having this same issue. I don’t have FFZ, just BTTV and tried disabling/enabling, and reinstalling it but the settings don’t show up, however emotes still work. Here is what my settings show: 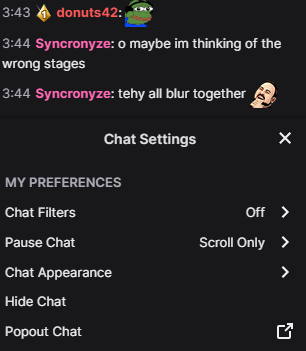 I just checked again, and it’s suddenly back. I’m guessing that it was a problem that BTTV fixed? Seems fixed though AFAIK.

The last fixes were 4 days ago (July 25th) and none of them concern your issue here, so it was likely due to another extension messing up with BetterTTV, glad that it’s back for you though! If it’s still happening, as I still can’t reproduce it, it means it’s likely on your side, try disabling all your extensions apart from BetterTTV and then turn them back on one by one to identify the faulty one.

I’m having a similar issue. I haven’t used Twitch in about a month, and came back to BTTV settings not appearing at all. The only difference between then and now was upgrading to Win 11 Beta. Not sure if that could be a culprit? Otherwise, went through and disabled all extensions with no luck.

I just tested this out in Chrome and in Edge and both do not show the BetterTTV settings anymore.

apart from doing a /join every time I enter a room

I wish I knew why mine suddenly showed up again. I changed nothing between the time when it was gone and when it came back. I genuinely hope you’re able to get this fixed soon.

I’m sorry, but we can’t fix anything as long as we can’t reproduce the issue, if you had a clear step-by-step guide that would lead us to this issue every time we tried, we would be able to pin point its roots and we could fix it, but without that we’re in the dark, we don’t know where the issue originates from and therefore we can’t fix it, I hope it makes sense.

An issue was opened on the repository, follow its development there, and feel free to add more information if you think it’s relevant, it’s likely linked to a new feature Twitch is testing, so we can’t do much until it’s pushed to everyone, we understand it’s frustrating, but please be patient.

Did you miss the part where I said that it went away? I don’t know how or why, but it seems to be working again. I thought I was clear about that.

I didn’t miss it, but I was answering broadly for everyone who still and who will experience the issue.

Hi! I got the same problem where the settings icon is not showing anymore, yesterday I cleared the cache to try to fix other problems I have with twitch Live (which I don’t know what they are due to) and from that moment the extension has stopped appearing, among the Edge extensions it is correctly installed and the BTTV icon appears up in the browser toolbar (but there are no real settings by clicking on that icon except to “hide” it)
Is there any way to fix this problem? Because until two days ago everything was working correctly, and also I don’t have any other twitch extension installed

Same answer as before: probably Twitch testing something on your account, if we can’t reproduce the issue, we can’t fix it.

Everything worked fine today, but now it’s not working again i dont know why.

I have no BTTV menu showing in my settings on twitch. I have the extension installed and the settings I previously set on the BTTV extension are still working on twitch but, BTTV itself is no where to be found and therefore I now can’t make any changes. It’s been like this for the last couple of days but, was fine previously.
The version of Chrome i’m using is as follows: Version 92.0.4515.131 (Official Build) (64-bit)

Any assistance you could provide in getting it to show up again would be appreciated.
Thanks