My BTTV, emotes and emote button specifically, aren’t working and I went through all the instructions at BetterTTV Debugging
(minus the firewall cuz I couldn’t figure that out) but nothing worked.
Tried to follow the instructions and get help over at https://github.com/night/BetterTTV/issues/3487
but can’t seem to get any response. Hope I’m doing this right. ;-; All this computer stuff is all jibberish to me, please help.

I’m having the same problem of my emote button not showing up. I’ve tried everything I could think of.

The same happens to me, emotes are showing in chat but Emote Menu (it’s ON in BetterTTV Settings) isn’t appearing.

I’m having the same problem. I see the emotes in chat but, the emote button under the chat is gone even though the settings for it is on.

I have the same problem, no matter what I do nothing changes, uninstalled and reinstalled but no difference.

I am having the same thing as well. The emote button that used to be next to the cog at the bottom is just gone

Same. Emote button is gone, but i see bttv-emotes and gifs in chat, can text them, but cant choose them from menu, toggling on/off options doesnt help.

I have had the same issue the past two days.

This is not the issue. Chrome shows the version of the chrome extension. That extension will load the BTTV source, which is version 7.2.58.

If you open your BTTV settings on Twitch and go to the “About” tab, it will show your current BTTV version, the current version is 7.2.58.

About the emote menu issue, it’s probably a test/update rolled out by Twitch to a part of their users. So only some people are affected. So far I’ve not been able to reproduce this.

Oh right, did forgot about “About” in BTTV settings. That makes sense then.

Then it’s probably some twitch invention. Anything we could do, to help?

Same issue here, just updated chrome today from 65 and bttv menu, emotes not working. FFZ isnt working either so maybe its something with twitch idk

same issue for 1 week i guess. not only the emote menu button is gone but also the viewer list button is gone. i think i have this problem since twitch changed the resub sharing design, so it will not show up at top of the chatbox but at the bottom and you have to use the regular textbox for your resub-sharing message. 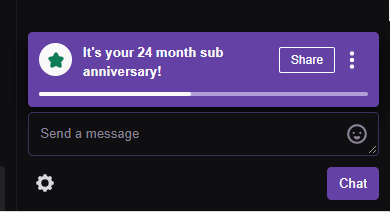 I’ve had the same issue so I looked into it.I didn’t dig too deeply into the code, but I found that button is just as it appears it’s just gone or not generated?

I know it’s working for other people in chat, but even if I click the regular twitch icon button and scroll, the BTTV emotes are nowhere to be found.

just another in a sea of people that say its still not working for me either! can see them, just can no longer go to the menu (even though its on) and use them mself. (both emotes and gifs)

Twitch seems to have made some changes in their site, so we’re gonna have to wait for bttv team to catch up.

To anyone who cannot use their emote menus, I’ve copied and pasted below an explanation given by a supporter from the NightDev Discord server:

If you are seeing no emotes/emote menu button and no viewer list button, you are almost certainly a victim of Twitch forcing you onto testing a new version of the site, which apparently breaks BTTV at a low level. One user on the forum who is experiencing this problem has also reported that FFZ does not work for them either, further supporting a low level initialization failure. Unfortunately, none of the developers are seeing this testing site, so there is nothing that can be done to fix this until and if Twitch releases the changed site to the wider user base. A small number of users have reported that clearing cookies got them back on the normal site, but we can’t guarantee that.

In the meantime, you can join the NightDev Discord server at https://discord.gg/nightdev and watch the #betterttv channel for any updates on the situation.

After deleting twitch-cookies viewers list is back, but emote&gif-menu is still gone