What's the variable on !game? 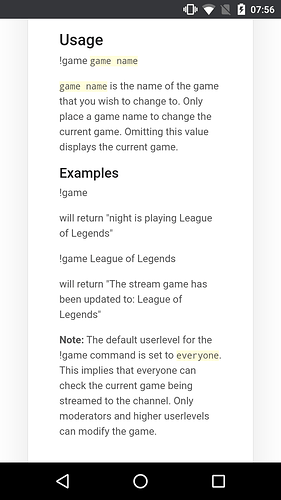 Hiya, have a look at the Twitch variable: https://docs.nightbot.tv/commands/variables/twitch
The current game can be found there.

Yeah yeah that’s the first thing I tried but it’s not the same thing, it’s like the $(twitch) variable it works like a command to stalk someone’s else channel instead of yours, it doesn’t work when you’re offline and stuff, btw there’s a way to activate an default command that is off? If you don’t have manager permission and you want to enable for the streamer but he doesn’t know where’s that option and he don’t want to waste time? 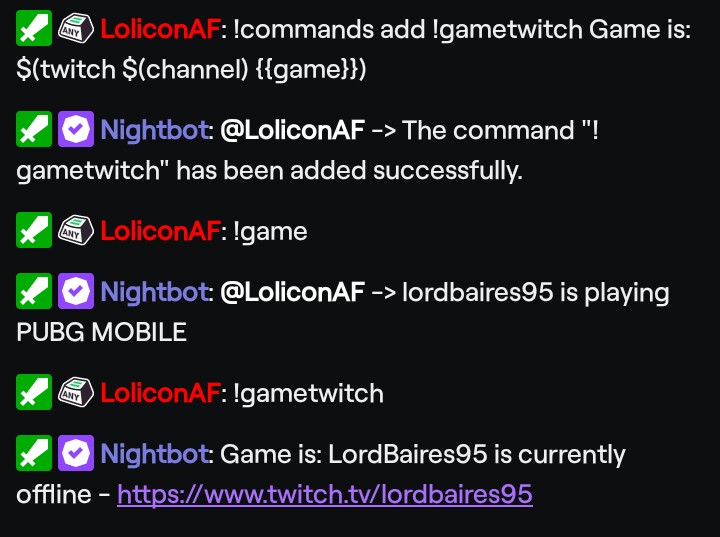 Yes $(twitch) only works if the user is live streaming. Which makes sense, if a user is offline, the streamer is not currently playing that game? I think that’s the only way of getting the game info.

For your second question, you cant enable commands from chat, so you will need manager access.

Yeah, makes sense, it’s just sad that the default command it does and the twitch it doesn’t

the reason why I want it the default command is bc the stream where I have permission on it doesn’t stream that much so I can’t see what the commands exactly says (when offline), so I can decide what to write on the command, and the reason why I ask if I could use some command to enable the default !game cmd it’s bc there’s a channel where I don’t have permission and the streamer don’t have that much time bc… reasons. And the mods make the all hard work for him to support him and stuff. Thanks anyways <3