Timers activating all at once

I tried Nightbot timers for the first time on my last stream and they didn’t quite work the way I’d hoped. After I finally had someone chatting, after a little bit all four timers activated at once, rather than being separated by 15 minute intervals, which is what I was expecting to happen. What am I doing wrong? Obviously they’re all disabled right now because it didn’t work properly. 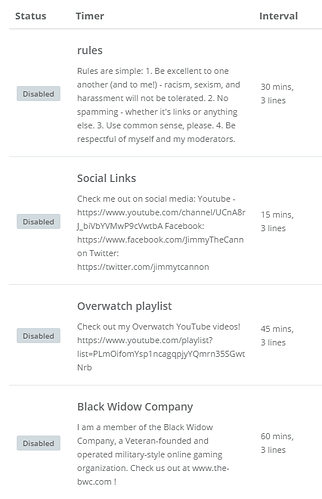 Could it be that noone made that “3rd” line of chat for 60 minutes, and then suddenly someone says something, fulfilling the 3 chat lines condition?
Since enough time has passed for all timers and they all share the same number for the chat lines condition, all messages went out at once – Just guessing though.

That’s pretty much what happened - my stream gets few to no viewers, so I had nobody talking for a while and then one person chatting for a bit.

So, in addition to staggering the time I should stagger the amount of lines needed?

Could try that, to prevent the previous scenario yeah.

Your timers are multiples of the same number, so they will stack at certain times (albeit with a bit of delay in posting, but if your chat moves slow it will be stacked). You should stagger them to prevent this.

Ah, I completely misread how the time interval was supposed to work.

Hrm. I’m not sure these timers will do what I want them to do, then. No matter how I set it up some commands will be repeating much more often than others.