Server Commands other than /me /announce are blocked 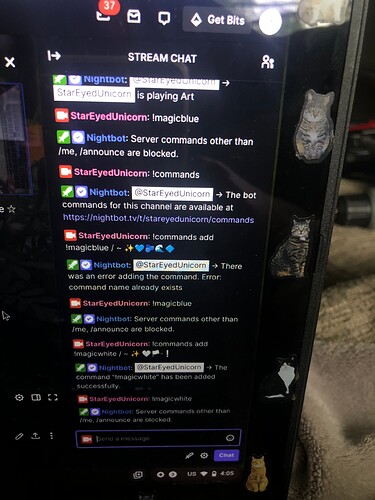 I don’t understand. Nightbot will do the default commands. !socials is a custom command which works. But I set up these “spells” and they won’t work. It says only /me and /announce commands are blocked but that’s not true??? I added the white one from the chat command in case it was the nightbot website not working and, as it says, it added the command but then when I type it out it says the same thing.

Seems to be because your command contains a “/” at the start of the command
I tested it on my chat with and without the “/” and it works without it.

It says only /me and /announce commands are blocked but that’s not true?

It doesn’t say that, read the error message again:

Server commands other than /me, /announce are blocked.

That means you can only use /me or /announce, you understood the opposite. It’s this way for security reasons.

Therefore you should understand why your command starting with a slash / confuses Nightbot, it sees something that isn’t allowed: a slash command that isn’t /me or /announce.

To fix your issue, you can do like @notjoker28 suggested: removing the slash / from the command, or you can add a blank character that Twitch doesn’t automatically remove (so not a space or a separator) before the slash, as the first character of your command’s response, I suggest this one, it’ll look a bit off, but you’ll have your slash.

It was the slashes in the command.

Seems so obvious now. (Also I don’t think I explained well. I sometimes have trouble expressing my point, especially with tech talk. But se la vie.) And thank you for comments to help me!