I tried to use the other posts that I’m sure covers my issue but I couldn’t get anything to function. I just want a Nightbot to return a random response from a pastebin but every version of the commands I find on here leads to “Code generation from strings disallowed for this context”. That makes me think it’s something within the pastebin itself, but I couldn’t find anything about it either.

I need a command to just pick one of these to say please ):

neon command - Pastebin.com this is the pastebin

That’s because your JSON array isn’t defined properly, use double quotes " instead of backticks `.

I changed it to double quotes but i dont have a command to use it still. I looked one up but it just returned:

Code generation from strings disallowed for this context

My bad, I thought you had a command already. I’ve had an intense migraine these last couple days so I’m sorry if I miss some things. Poking me gently about it like you did is the way to go.

There are two options to fix your code:

• the first one is to keep your JSON in your Pastebin intact and build your code around it:
→ Pastebin:

Replace XXXXXXXX with your paste ID.

• the second option is to edit your Pastebin so it’s just strings separated by a separator and write your code around it:
→ Pastebin:

Replace XXXXXXXX with your paste ID.

about the first solution:

about the second solution: 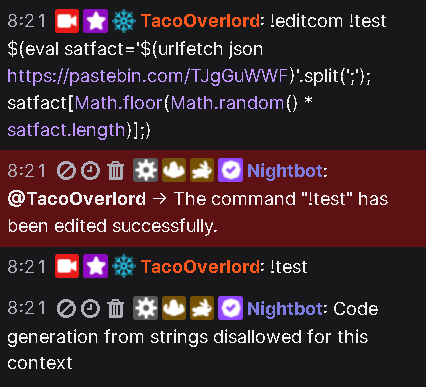 I tried the first and second option but was met with the same result as before. I tried putting brackets on the pastebin to see if maybe it was that, but had no luck

P.S. Sorry about your migraine ):

It’s working for me 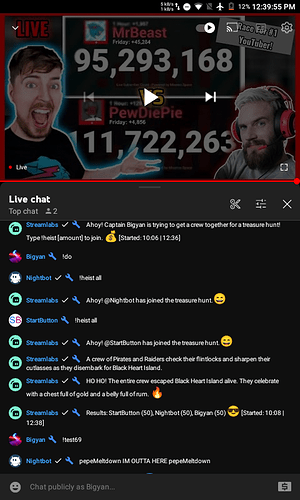 Thanks! This command worked for me.

It didn’t work because you omitted the raw in the Pastebin link.