One command not working, the rest work

I am using Nightbot for YouTube on a Public livestream.

All of my commands work except for this one… Any ideas why this one command wouldn’t work? 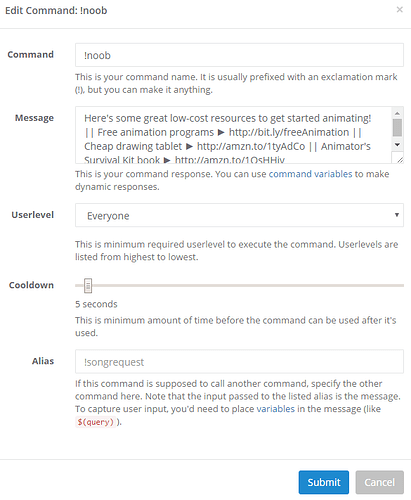 Thank you for your help!

Here is another post with relevant information with potential solutions:

How to circumvent commands that stop working on YouTube? Nightbot

So after a while, every command that isn't some variable response stops working. Even after changing up the response a bit, or the command itself, it doesn't work. Is there anything I can do to circumvent my commands getting blocked? I run a 24/7 livestream and Nightbot is becoming kind of useless if every command gets blocked after a week or so. Have you done any testing as for a method to avoid my commands from getting blocked? Thanks! I have already tried adding some variable things at the…