I wouldn’t create this thread until I tried everything. But, I use Nightbot’s !sr command a lot in my streams. This last week, anytime anybody below a moderator would enter a !sr command, it would automatically add a disgusting documentary about a horse farm and how they inseminate them.

My settings are still default, and I’ve even tried to delete the !sr and the !songsrequest commands. Nightbot says neither exist. I’m pretty sure someone hacked my Nightbot and I’m being pranked pretty hard. Well played, hacker. Can someone please help?!

All of that was confirmed before I even started this thread. As I said before, my settings are all default. No custom commands have been programmed. And I even tried to delete the !sr and !songsrequest commands. Anytime that video is added, I instantly delete it from the playlist to make sure it isn’t broadcasted on my stream.

It’s not possible only your instance of Nightbot was “hacked”, if it was it’d be the entire bot and we’d have many more reports on the same issue as yours, so I encourage you to double check everything.

OK, so you’ve helped me identify that Nightbot wasn’t hacked, but you haven’t helped me fix my problem.

I have checked everything you listed above and the problem still exists. 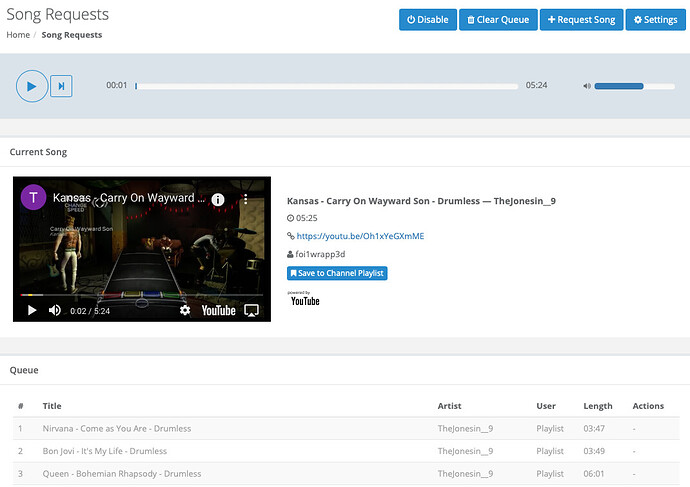 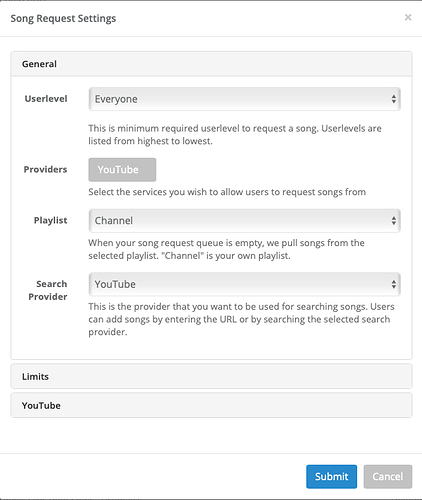 Hmm, looks like everything is indeed clean. Since you seem to only use Nightbot for the song requests, I assume you’re using another bot for your commands, if so look at its commands.
If the issue isn’t there I don’t know where it could be.

Nevermind, I do have an idea, they can request songs from here without having to type the request in chat, in which case their name will appear next to the request. However, to do so they have to send a message in your chat first, so this must be one of your viewer. If you ban them they shouldn’t be able to request more songs from the playlist link since they won’t be able to talk in your chat anymore.

I’m aware that people can use the AutoDJ page to make requests, but using the chat command is more convenient. And while I do have another bot for Restream, that’s that bot’s only purpose. My Nightbot use is slowly growing, I currently mainly use its !sr commands the most, but I plan to use more of it. I’m a new streamer

You’re doing an awful lot of assuming, and none of it is accurate. Nobody is actually linking the video in question, Nightbot seems to be REPLACING the requested video with the one I’m referring to, Restream bot isn’t even capable of !sr commands.

Thanks for your efforts. I’m sorry you feel so much pressure to “know my solution,” but you clearly don’t, and that’s okay.

The thing is that I know how Nightbot works, and you need my help because you don’t.

I understand that from your point of view it looks like Nightbot is replacing the requests, but what you’re describing is simply impossible unless you have specific settings, that’s why I have to think about possible settings/setups that could lead to this, and then redirect you towards them so you can check and see if it fixes your issue, of course I’m going to assume things along the way, it’s part of the process, and it’s your job to dismiss them.

Now, it’s not with that snide attitude that you’ll get further help, so I wish you good luck! I understand that the situation is frustrating to you, but that shouldn’t prevent you from respecting the volunteers who try to help you. Remember the human.

Still open to suggestions. Horse farm video has now been replaced by an objective slapper, but still not what users are requesting.

Also, @Emily since you know so much and are convinced what I’m suggesting is impossible, then I invite you to observe the impossible during my stream. Thursday night 8/7 CST on Twitch.

OK, got it figured out. Big shout out to UBI_Ghost on Twitch for troubleshooting it clearly during his stream.

Turns out I had links blocked on both Nightbot chat filters and Twitch, however, the horse farm video is actually the work of Twitch, which… that’s a bit much. LOL

After whitelisting on Nightbot just for good measure, and removing the block on Twitch, the !sr command is working properly for everyone again.