Nightbot mentioning @everyone on Discord

First of all, thanks for doing all nightbotty-stuff and helping the community!

As of now we have Nightbot guarding our Discord server from all the spammers etc, which is awesome. However we’re not a big fan of people mentioning @everyone, for that reason we’ve disabled it for everyone. The problem is that people can still mention @everyone in a Nightbot command (e.g. !tickle @everyone would result in Nightbot mentioning @everyone).

The issue is that Nightbot is an admin, and has to be so in order to do it’s job, and is always allowed to mention @everyone. I have tried removing the Admin permissions and manually assigning Nightbot all permissions except mentioning @everyone, but this resulted in Nightbot not deleting links from people who are not allowed to post them (Nightbot did however give them the text warning, just didn’t remove the link itself).

Not sure if this is a know/intentional thing, but I’m wondering if there are any workarounds for this ‘issue’.

Again, thanks a lot!
Wieber

Removing administrator should not break Nightbot’s ability to remove messages unless you’ve not moved its role above the user group you’re moderating (roles on Discord are hierarchy based). If you haven’t tried that, try it out and let me know if that fixes your problem.

Putting Nightbot above all roles, except owner, doesn’t help sadly. See the pics below for more info.

Nightbot Permissions (of what I want to achieve): 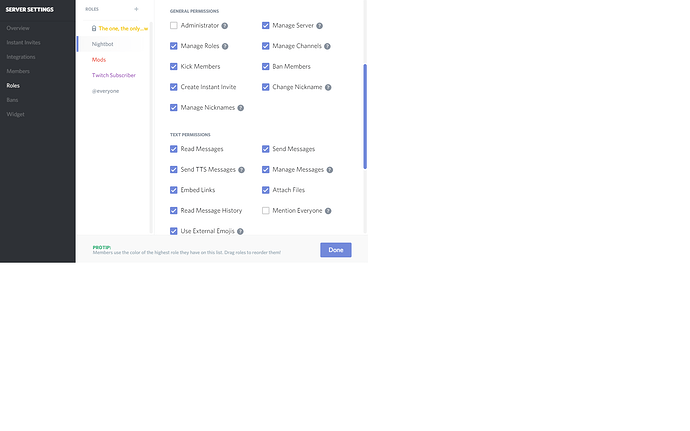 What these results end up doing in chat (both of these people are non-subs and should not be able to link stuff):

Tell me if you need more info!

I cannot reproduce any issues locally. As long as Nightbot has the “Manage Messages” permission it can delete any message in the chat regardless of role hierarchy apparently. Check to make sure Nightbot is actually assigned to the Nightbot role.

Nightbot had the right role and the hierarchy was good.
However, I fixed by simply promoting Nightbot to the Mod role (which was lower in hierarchy and had less permissions then Nightbot). Maybe not as intended but it works for now!

Thanks for all the help and thanks for doing everything you do.
Wieber