Ok to comfirm Nightbot is my chat and has been given moderator with /mod nightbot. All the commands seem to be fine and working. Still having an issue with the auto DJ though. The commands will queue up songs and I can use commands to see the next songs. When I try to use “!songs play” the command works and says “The music player (if opened) has been sent a play command.” , but nothing is happening on the AutoDJ page where I see the list of songs queued. I’ve been looking around on here, but I’ve not found any solutions to this.

The commands when used in chat just direct the AutoDJ page to perform an action. If that action does not occur you might not be connected properly to our real-time service on the AutoDJ page. Can you open the browser console and look for any red lines and paste them here as a picture?

If you mean red lines of text on the page anywhere. I do not see anything like that. I have however found after messing with some commands. If I start a song on the autoDJ manually I can use commands to pause, start and skip the song. Though the next song in the queue will not start when the first song finishes or the first song is skipped.

Night was referring to the browser console:
You can use the “ctrl + shift + j” shortcut or right click anywhere on the page and hit “Inspect element” then there should be a tab called “Console”. An error message might show up there when you perform an action on the AutoDJ page. If so, please post the error message here.

Ok looking at the console now… there are lots of windows here which one would the error be showing up on?

Apologies I forgot to hit the console tab checking on it now. 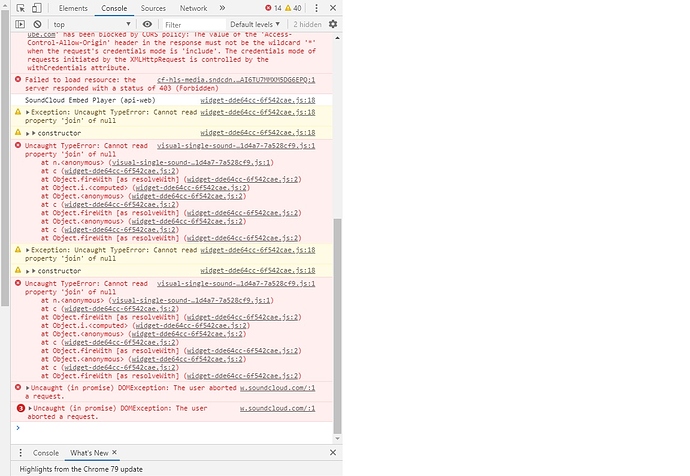 Is that image what you meant?

Nothing looks out of the ordinary there. The play command only works if the player is paused. Is a track currently playing when you use this command?

Yes. I noticed that if I start a music track. The command would pause and start the track. Though, when that track finishes. The song will not move the the next in the queue.

Are you sure you have the browser tab in view (not in a tab clicked away nor minimized to taskbar)?

I’ve had the window with AutoDJ open on another screen while issuing commands such as adding songs to the queue. As well as when testing the start and pause functions. I’ve even chosen a shorter song (Around 3 minutes) to see if the game would transition to the next in queue. I did that with the auto dj on one screen and my chat on another so I could see both. Are you saying the Auto DJ screen has to be fully visible even while playing a game for it to function?

Do you use browser extensions? If so, try disabling them all. If that doesn’t work, try a different browser.