I noticed there’s been an update to BTTV, and the UI for the settings menu has changed. Only reason I discovered this is because all of a sudden I started seeing highlighted messages showing up in twitch chat. In previous versions I could enable a feature that would remove the highlight from messages and display them as normal messages, and this appears to have been removed in the most recent update. Is this an oversight on my part and I’m not seeing it, or has this feature been removed from BTTV in the latest update?

If it’s the latter, may I request to have it re-instated?

EDIT: Just to be 100% clear, there used to be a BTTV feature that would disable the functionality of twitch’s redeemable “Highlight My Message” function, rendering a highlighted message no different than a regular message. That feature appears to have gone missing in the latest update. If it could be re-introduced, it would be much appreciated.

@night Could you give detailed information about this? I have seen a similar post with the same thing.

The setting is still here: 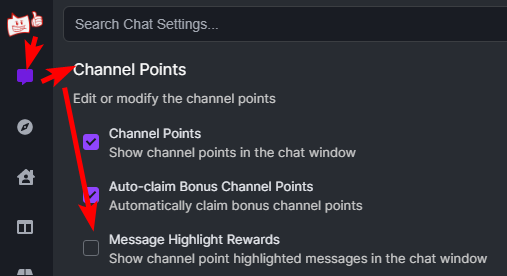 If despite having turned it off it still shows as highlighted, it’s possible a Twitch update messed with BetterTTV, in which case it’ll be fixed shortly.
Make sure your browser and BetterTTV is up to date, clear your cookies and cache for Twitch, and then see if it’s still broken, if it is you can report it here, give as much details as possible such as your browser and its version and the BetterTTV extension version.

We appreciate your enthusiasm @Rubio, but we @night only in last resort. We try to fix the issues first and if nothing works then we do, because he’s very busy with his job: NightDev is a side-project. If you don’t know how to solve something just wait patiently, someone who knows will jump in and you can learn from it so you too can help in the future!

I checked and the “Message Highlight Rewards” was unchecked, yet I was still seeing highlighted messages from the “Highlight My Message” reward. I’ll follow through with reporting the bug, but for what it’s worth, my BTTV version is 7.3.3, and I’m on Chrome version 92.0.4515.107 (Official Build) (64-bit)