The result I get is: Invalid region specified. Available regions: br,eune,euw,jp,kr,lan,las,na,oce,tr,ru,pbe

What am I doing wrong?

I am unable to reproduce any issues:

Do you use the code exactly as follows?:

If so, I have no idea what’s going on

What does your !lolrank command look like?
In your example it should look like $(leagueoflegends $(query))
Then !lolrank iP3RAD0X euw should work fine.

That is exactly what I use… Could it be that the servers were simply down/to crowded?

No, like the error says, the command doesn’t like the input that it is given, it can’t find a valid region. That’s why I would think it’s setup wrong: 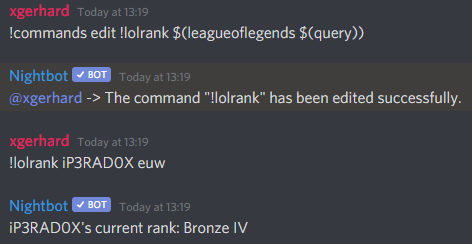