I am wanting to make a !duel command that does this

Okay so when someone on the youtube stream type !addduel it will add there name to a list and then when someone types !duel it will show all people that are waiting. Idk if this isn’t possible or not.

!duel You to a challenge do you accept

@Zemo_DEV This is possible using ehsankia’s quote API - read more about it here.

What you do is click this link. It will generate three links and two tokens, a public token (8 characters long) and a private token (16 characters long). The public token is located within the first generated link. The private token is located within both the second and third generated links. The tokens are found after token= and before &data=$(querystring) Copy them and keep them somewhere safe!

So you want two commands: !addduel which adds the user’s name to a list and !duel which shows that list. Copy and paste these into your chat to add the commands. Replace PUBLIC_TOKEN with your public token and PRIVATE_TOKEN with your private token:

One of them are too big. What do i do?

Click Add Command
In the Command field type !addduel
In the Message field copy and paste the response for the !addduel command. The response should contain 199 characters, which is within YouTube’s 200-character response limit.
Click Submit

Okay so when i foment hen !addduel and done my name it sent back the message. What do i do and also there was nothing in the list

When you type !addduel it should add your name to the list if it isn’t there already.
To get the list of users type !duel and it’ll give you a link to the list.
If you followed the instructions for setting up the commands (generating the public and private tokens and placing them into the command responses) they should work.

I did but when i type !addduel it spits out the raw message.

The message is 7 characters over the limit.

I’ve included a screenshot of what it should look like on the dashboard: 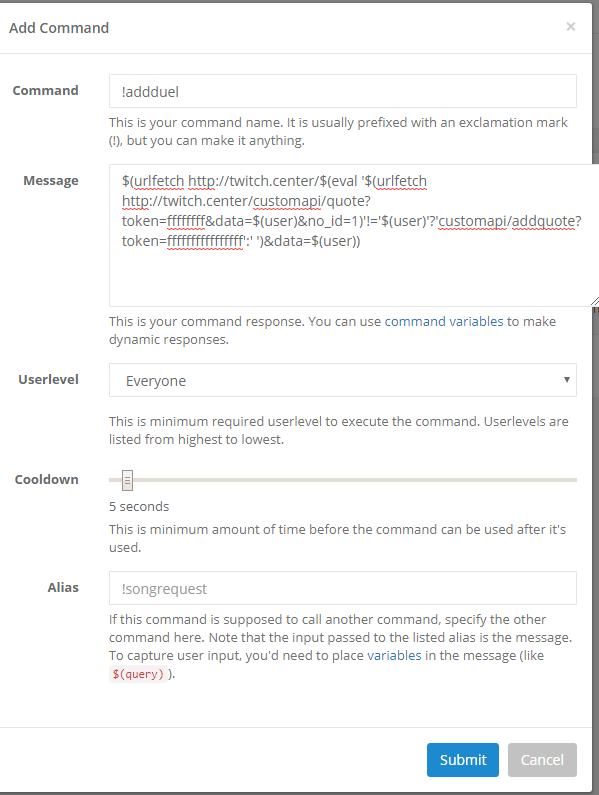 I have all the same stuff and it sitll doesnt work…

I have the private tokens and public tokens

Compare your screenshot to my screenshot. The command responses aren’t the same. Specifically there is %27 where there should be '

For future reference, do not show anyone your private tokens.

It was discord messing with me and adding the things UGh. What i am wanting the command to do exactly is if someone does !addduel and it will add the to the list
IS this possible?

Its only adding our youtube names but thats not what i was looking for. The command is for a minecraft streamer and hes wanting this to be a duel list so if someone wanted to duiel them they will do !duel but when i do this it just spits out my Youtube name. I know $(query) may be possible but idk

We tried that but it was still spitting out my youtube name and nothing after that.

I’ve been playing around with the response for the last 15 minutes trying to fit $(query) in without going over the 200-character limit. What I did was just cut out the part that checks whether your name is on the list:

Well thanks man! Means a lot!

SO this will spit out whatever i type after the command?