Hey so I’ve got a multitude of issues with the discord integration process.

It appears to pick and choose emotes at random to add to my server when there’s more than enough slots, I know size could be an issue but I’ve manually added ones that it’s skipped in the past so it can’t be a size thing, also it doesn’t like to sync that often.

Here’s the list of emotes on my BTTV channel: 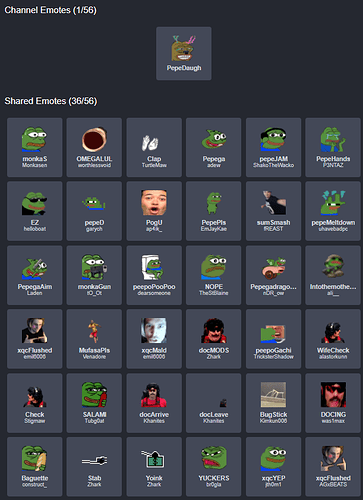 Here’s what it added:

After re adding the bot once again and waiting say half an hour here’s what it added: 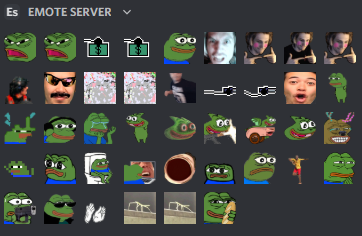 As you can see the bot duplicated a TON of emotes for no reason, also ignore the WifeCheck emote I had to add that myself as a test cause the bot wouldn’t add it for some reason.

Also it doesn’t appear to want to sync as often as I’d like, someone on discord said it was every time you added a new emote to your channel but I have to dissagree with that as it outright refuses to most of the time, a simple “Discord sync” button would suffice for that I assume.

Due to rate limits and upload size constraints the initial sync may not complete entirely and some emotes may fail to upload. You can currently retrigger sync by updating an emote or adding/removing a shared emote.

It is possible your duplicates were caused by you kicking the bot from the server rather than removing it via the control panel. We can only cleanup existing emotes on removal if we have the access.