I’ve been made the Nightbot manager of a certain channnel, and yesterday, while looking through some of the custom commands, I saw that all of them had suddenly changed their cooldowns to 30 seconds. The channel owner is LeftResponse, and there are 246 custom commands in his channel, and I’d rather not have to manually set each command’s cooldown back. Can something be done about this?

The cooldown of imported commands prior to Nightbot v4 is 30 seconds, so they were probably already 30 seconds and it wasn’t noticed.

The majority of the custom commands had been created by me within the last couple months, and all of their cooldowns were at default, 5 seconds, until today.

Then one of your mods/managers changed them.

I created a new custom command in my channel to test this out. 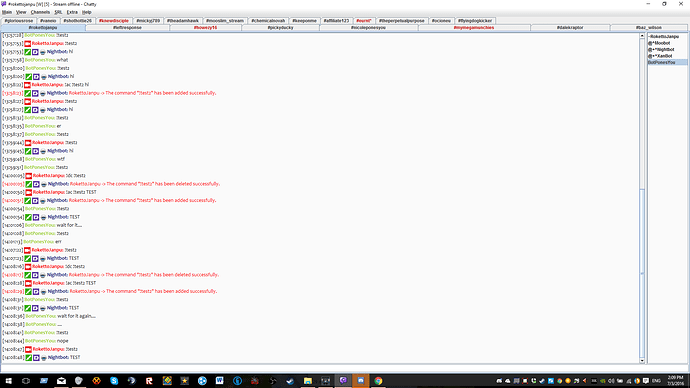 BotPonesYou is just an Ankhbot thing set up my computer I used to run !test2

After I just created !test2, I ran it under BotPonesYou and it ran successfully. After waiting for about 10 seconds, I tried to run it again. It didn’t work. It did run just fine when I ran !test2 as myself. Was the default command cooldown changed from 5 seconds to longer?

Look, we don’t change users’ cooldowns, and they don’t change themselves. The cooldown is whatever it is configured to per command.