Whenever I try to use the emote menu and click on an emote it doesn’t do anything. It won’t insert the emote into chat for me to use it. Clicking on it just does nothing.

I’m using Chrome. I had the same exact problem 2 years ago but don’t remember how it was fixed. Now it is happening again.

Some errors show up in the extensions section but I don’t know if they are relevant to the problem. 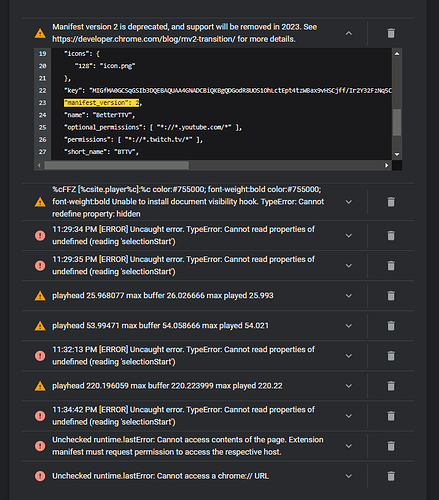 It seems to me that the issue is most likely another extension, to test this, turn off all your extensions except BetterTTV, see if the issue is gone, if yes, turn back on the extensions one by one so you identify which one is causing trouble.

I disabled everything and hit reload on the BTTV extension just to be sure and it still didn’t let me select the emotes.

I see. Can you give us the BetterTTV version you’re on, and which browser and it’s version as well, so we can try to reproduce the issue, otherwise there’s no way we can fix that.
It’s also possible you’re on a newer Twitch version that they’re testing which may be conflicting with BetterTTV, it happens all the time, if that’s the case we can’t reproduce the issue either.

I ended up just uninstalling BTTV and reinstalling it and now I have the “new” emote menu but it at least works. I don’t really like the new emote menu but I thought that was reverted or maybe I did something to use the old menu instead and for whatever reason it wasn’t working anymore.

But I guess the problem is solved at least in this case with the new menu.

Thanks for keeping us updated about what was the issue, that’ll help us provide support in the future.

The menu was updated because it was using a dependency that was no longer maintained, which tends to bring its set of issues, and potential security point of failure.