[BETA] Nightbot claims to be in channel, does not see any commands or messages

Nightbot shows up in my viewer list, however, when I try to use a command, nothing happens. The dashboard also doesn’t show any messages.

I’m having the same problem.
Seems like others having it also.

Think the servers went down. I was experiencing the same issue, but Nightbot is responding now.

Sorry about that. Someone threw some data into Nightbot that crashed its chat parser. It’s back online now and the issue is resolved.

Nightbot commands seem to have stopped working in YouTube - its been like this for a couple of days. I didn’t say anything as I thought it was probably something due to YouTube updating and you needed a day or so to get it working again. (Note: Twitch is still working just fine).

I’ve tried parting and rejoining Nightbot to YouTube, but that didn’t help. (Yes, I did this while a stream was live, commands were working up til a few days ago on YT.

Is there anything going on that would be causing this, or something has been changed perhaps? I run Nightbot on both Twitch and YouTube.

I distinctly remember seeing Nightbot in over 5 of your YouTube live event chats, so I find it hard to believe it’s an issue on our side. Ensure you modded Nightbot on YouTube, since it can’t post in chat otherwise.

Hi! I’m having the same issue on youtube gaming during my livestream. Nightbot has never been in my channel although it says part channel (indicating he’s joined) and I have set him as moderator and it is under the right channel that is being managed.
Nightbot won’t respond to any commands or respond to say that he is in the channel when I press join channel. Nothing happens but it does say part channel.
Nightbot does have the top chatter and top command indicated in the dashboard and he is able to timeout viewers but is simply not responding to commands or indicating he has joined through a greeting. I’m not sure why this is happening.

respond to say that he is in the channel when I press join channel.

Nightbot does not give a greeting when he joins any longer. This is because it takes Nightbot 30-60 seconds to join a channel.

Nightbot does have the top chatter and top command indicated in the dashboard and he is able to timeout viewers but is simply not responding to commands or indicating he has joined through a greeting.

If Nightbot is reading chat, then it is in your chat. If it’s not able to respond, this usually indicates that you did not give Nightbot mod in your YouTube chat. On YouTube, Nightbot cannot speak over the YouTube API unless it’s a moderator. Additionally, timeouts were working because we were timing out users with the channel credentials. This has been changed as of last night, and Nightbot now issues timeouts to users from its credentials (meaning that it can only timeout if it’s a moderator). 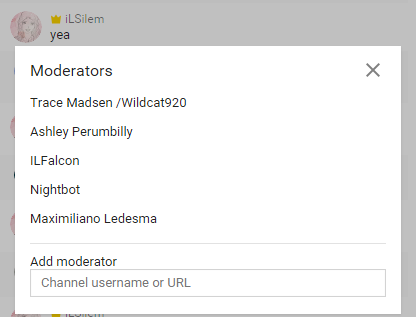 Thank your for getting back to me. Nightbot is a moderator in my channel but won’t respond to any commands but does timeout and on nightbot’s dashboard it does say who is the top chatter and top command. When a command is input into the chat nothing happens and I am inputting the commands correctly.

I also run nightbot on both twitch and youtube

Check that you have the right Nightbot added on YouTube as a moderator. Names on YouTube are non-unique, so it’s possible you added an impersonator. Check that you’ve added https://www.youtube.com/channel/UCSvjQBDgYDB5TGVmCZObcwA

Yes I did! I copied and pasted the website from the nightbot dashboard message (once nightbot joins the channel) and from you right now and another nightbot did not show up its the same nightbot.

Unfortunately since all of the live chats on your YouTube channel appear to be disabled, that would explain why Nightbot is having issues. Undisable all live chats and there should be no issues.

Hey Night,
Nightbot was already set as a moderator - as I indicated in my original message, commands used to work just fine and I hadn’t changed anything since then, it just stopped working. FYI I was also not seeing it in the Viewers list, so that seems just odd that it thinks it was in the stream yet there wasn’t any indication in chat-side that it was there.

But just in case YouTube had some corrupted data or something, I removed it as moderator, removed it from the channel, rejoined and readded it as moderator with a fresh copy and paste of the YT Nightbot channel URL. I did this when I didn’t have a livestream running (which is what I did the first time round, and when commands used to work in chat).

And that seemed to fix it - so I’m not sure what happened. But I wanted to let you know the details in case it helps others.

It is important to note that YouTube does not have only 1 chat per channel. Each new stream is a new chat when using their events system.

If you use their “Stream Live” system, not events, you do use the same chat room. If you disable this “Stream Live” chat room, Nightbot will leave when it’s told chat is disabled and will not rejoin until you’re live again (not when chat is undisabled). The only chats where Nightbot will “join” when you click “Join channel” in the control panel is actual live streams and this “stream live” chat.

When you go live, it takes Nightbot time before it knows you’re live. This can be anywhere from 1-10 minutes, depending on what information the YouTube API provides Nightbot with.

Unfortunately unless you’re actually streaming when Nightbot is dysfunctional, it’s really difficult to debug any potential issues. If you’re live for more than 10 minutes and Nightbot isn’t in chat still, feel free to reach out to me in our live community chat: https://nightdev.com/support

Hey Night,
Hmm, I was already aware of most of those YouTube issues you mentioned in your last reply before I started commenting on this thread. I didn’t know, however, that it could be up to 10 minutes wait - Nightbot usually responds very quickly, so I guess I could have been spoiled.

Should I have issues in a future livestream, I’ll reach out during the stream if possible. Thanks for the chat link!

@ilsilem Nightbot is unable to send messages to your channel. This is probably because Nightbot is not a mod in your chat. YouTube returns the following error: “The message could not be created because of insufficient permissions.”

Message not sent: You’ve been blocked by the owner of this video or a moderator.

WOW Thank you! One of my moderators blocked nightbot! After unblocking nightbot responds! Thank you, so much for all your help! Thank you thank you!!