I do t know how to code or make custom API, but I need something to count every persons warnings, i want this because a person might be warned and I will forget how many times that person was and there might be multiple people. i had a command made myself but it didn’t count individual people. It just counted up. I want it to be something like “person-1 has been warned 1/3 times” person-2 has already been warned twice before person one did," person-2 has been warned 3/3 times" and the mods can handle it from there. This has been an issue for me and I forgot how many times someone has been warned. Can someone make this or if it has already been made just give me the link. Please and thanks.

I’m not sure what you refer to by “warnings,” but Nightbot will only provide a single warning before issuing a 10 minute timeout. There is not much need to count warnings for Nightbot’s spam protection.

@night If someone does something against the rules but you want the person to have more chances before a timeout/ban. A person is being warned that he/she did something wrong before he/she gets a timeout/ban. I want this because Nightbot can’t detect other rules made by streamers. If a streamer says you can’t say anything inapropriate because he/she wants the chat to be kid freindly, nightbot can’t detect that, only humans can, so the mods will warn him/her. It’s also hard to keep track of how many warnings someone has. That is what I mean by warning and that is also why I want this.

From the view of warnings someone, it should be from a moderator that isn’t a robot. Through experience those moderators should be the ones that keep track of everything, not Nightbot. That and I don’t see how a CustomAPI could be used in this situation.

Make sure there are clear defined rules. If anyone breaks them purge them or time them out. That is their warning. Up to you on how to handle that.

@Aaron128l I am a mod on 2 people’s streams, they want the people to be warned before getting banned or timed out. I see your point and I just think it’s hard to keep track of how many warnings 5 different people have. The custom api would be used to count and keep track of the people’s warnings, so it’s easier for mods. That’s what the custom api would be used for. But again I see your point and I’ll try to do that. If someone still does that for me that would be great but I’ll try my hardest to remember.

BTTV offers a recent message of that person if you click on their name in the chat. If that would help you out. 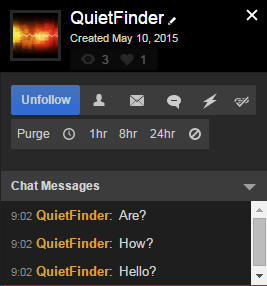 @Aaron128l ok thanks but I’m on mobile and that does not work on mobile I barely use twitch on my computer. But when I do use my computer that will help me a lot and some of the other mods use a computer so if they don’t know that I will be sure to tell them. Thanks.