I’ve been using Nightbot song request minimally without issue. Today we put it through the ringer more than usual, and an issue arose that i don’t see talked about anywhere.

For several videos, from chat they look like they were added to the queue properly. But they never play. Studying the Nightbot playlist queue, when these songs are added, the message “video cannot be embedded” pops up.

Now, this is all fine and maybe working as intended, except that there’s no indication in chat that the error has occurred, and no backup plan for nightbot. If people request a song by title and the top result happens to have disabled embedding, and i’m not staring at the nightbot playlist when they attempt adding, no one will ever know that the song wasn’t added.

Couldn’t nightbot handle this more intelligently, by either a) responding that the video does not allow embedding, or b) (if searchd by title) going to the next most popular result that allows embedding?

When items are initially added to a channel playlist, they are checked for embedding capability before being saved. When songs are selected from the playlist to be placed into the queue, they are rechecked. It is at this point that I assume you’re getting the error. This would be because songs on your playlist that were once embeddable no longer are. Unfortunately in this case it’s not something we can fix, as embedding is not something under our control. You may need to prune your playlist to get rid of the non-embeddable songs.

Nah that’s not what’s occurring. The playlist is entirely empty when this problem occurs. I’ve never kept anything in the playlist.

Well we 100% check for embeddability of videos when requesting them, so unless you can provide a specific example video there’s nothing to fix here. 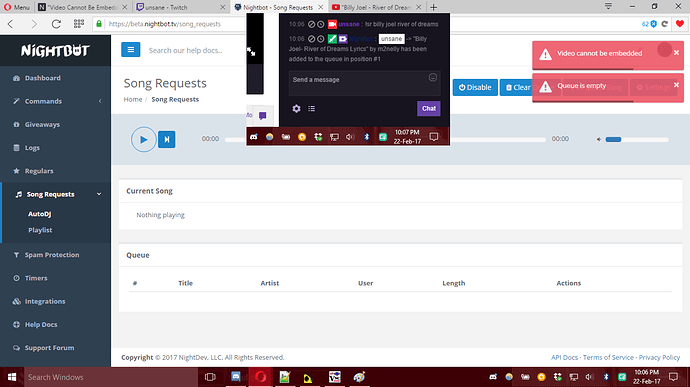 It embeds fine for me: https://nightdev.com/i/ss-9ac8P0MUylKhYNsdk6yitT9PI.png

This generally means that the video is embeddable, but it is not available in your country. For issues like that, we don’t know it’s unavailable until the video plays. Google used to allow us to query for that in API v2, but it was removed in v3 (the current version of their API).

Are there any known workarounds, for example using nightbot song request tab logged out of youtube, or in a private tab, or in a proxied tab?

You can try using a proxy, but we offer no support nor advocate using them (i.e. you’re on your own if something goes wrong).