!support - Their name and URL

I am moving over from another bot and that bot allows you to have a support feature where you would type !support then your name, i.e !support SingingTurnip. When you do that the bot then says the following to chat for example:

Give SingingTurnip a follow at [url] they was last playing [game]!

Is it possible to have the same kind of thing for Nightbot?

The code the other bot uses is: Give $target a follow at $url they was last playing $game!

Yes, such a thing is possible in nightbot! Here is a command you want for exactly what you had before, just type in chat:

-ul=mod makes the command so that moderators and up can use it only.
The twitch and touser variables were used as well. You can read up on most of the variables and default commands here: https://docs.nightbot.tv/

Do I have to be broadcasting to have this work because this is what happens when I type it: 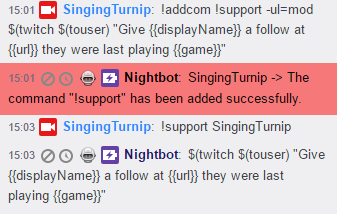 And i forgot the closing parenthesis. My bad. delete that command (!delcom !support) and type this instead:

Awesome, it’s now working, be cool to have a desktop program for this bot too instead of having to have a window open for it.

I have changed permissions to regular

be cool to have a desktop program for this bot too instead of having to have a window open for it.

You are in luck then, there is an app located here: https://docs.nightbot.tv/app-beta

Thanks and instead of me making another question, is there a way that Nightbot can thank hosts?

No, i don’t believe nightbot has functionality for that. It generally tries to stay away from filling up chat with “thank yous” for followers, subs, hosts etc.

Its possible to get notifcations on stream with other nightdev programs like host alert but not in chat with nightbot.

I have stream labels to show on screen but would like something in chat. It’s fine and I can understand the all spamming of chat thing.