For example if you set the !songs userlevel to everyone you could limit !sr to mods, but not the other way around

What if you made !songs usable by moderators only, and then !sr an alias of a different command? Like:
!commands add !songrequest -a=!sr
Wouldn’t that work? !songs will only be able to be used by moderators, and normal users would get to use !sr, just by a different name which would be the annoying part.

I don’t use the songs part of Nightbot so I’m not sure if it’s possible but, sounds like it would.

I’m not quite sure what you’re trying to achieve, sorry. What are you trying to do when someone types !sr if you’re not using the songs feature?

Can I create a custom command that does !sr that is separate from !songs? If so what would the command look like?

Only mods can skip songs and change volume by default no matter what the userlevel is set as, this can’t be changed

Huh, I guess that is non-intuitive because the FAQ shows the !songs and then has all the !songs features and then in the app we have the userlevel for !songs. Thanks then!

What I said is also stated when editing the songs command 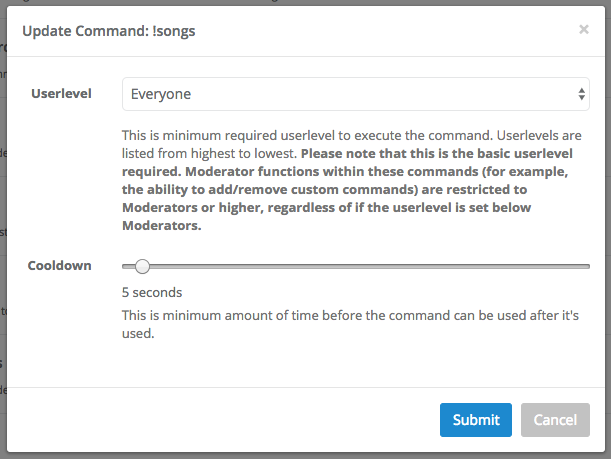 That doesn’t mention skip song, promote, pause/play. That same message is on all the default commands.

It is general text that is applicable to all default commands.