There are users that have donated to me with over 200 euros, but the leaderboards only show 49 euros. Sometimes the username is with a capital, sometimes it’s not. The actual PayPal e-mail addresses are all the same though. Why is it only showing up 49 euros? 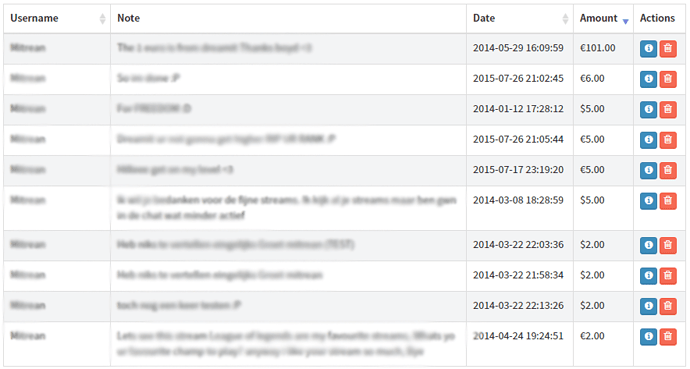 Because I’m tired of people asking, I decided to merge old transactions with user accounts.

For explanation of why you were seeing a discrepancy, see New Staking top Lists

Today I spent a considerable amount of my time to address this issue by merging old transactions with user accounts.

If a user sent you a tip from 2013-2014 with a PayPal email on a transaction sent from late 2014-now, the transaction was assigned to the user account associated with the oldest transaction. Some PayPal emails are seen across multiple accounts, and there may be discrepancies because of this (ie the transaction is associated with the wrong Twitch account). Discrepancies did not occur if the user always placed their Twitch username in the username field (that’s what the field is meant for, but some people like to place spam or use the field for unintended purposes like impersonation).

Thanks Night for somewhat fixing the problem. Is there the possibility to manually connect donations to Twitch accounts that don’t have a twitch account assigned yet? Most streamers that want to fix their leaderboards probably know who donated what. For some users it’s really frustrating not seeing themselves in the list, because they donated in 2013-2014. This to clean up the 220.000 transactions that haven’t been assigned to a user yet.

After having spent a considerable amount of my own time towards this issue, nothing more will be done concerning it. Anyone who has not sent a tip using the same PayPal email address since late 2014 is at a loss as there is not a way to prove they are the rightful owners of the tips they sent. We cannot allow broadcasters to meddle with transactions in the database, especially with assigning transactions to users without adequate proof of ownership.