Trying to add a !resetdeath counter for a streamer I moderate for, and upon putting in the command as !resetdeath -ul=moderator a=!commands edit !deaths -c-0 it will tell me when I test it that “Invalid parameter specified. Possible parameters: add/delete/edit”

I don’t understand this because I thought I specified edit as a parameter. Anybody know what I’m doing wrong?

You are missing a hyphen before the “a”. You need to add a backslace before the “-c” so that the count of !resetdeath itself isn’t changed when you edit the command through chat. The hyphen between “c” and “0” should be “=”.

Here you can see how others have implemented death counter commands: 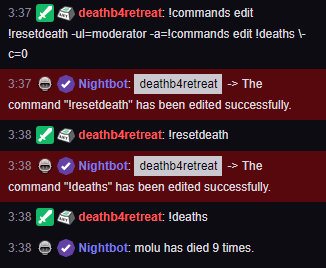 After using !resetdeath, you need to also use !deathadd to actually change the !deaths command.

Done, although it is kind of funky because until you use !deathadd it doesn’t change the display of !deaths to 0 unless you manually do it. Thank you for your help, it makes sense in a kind of backwards way that you have to edit the adding command.

Check out this custom death counter. You don’t need to call !deathadd after resetting.

Go to https://twitch.center/customapi/quote/generate. You will see three lines. After token= on the first line, you will see your first token. After token= on the second and third lines, you will see your second token. Use these to replace FIRSTTOKEN and SECONDTOKEN before you add the following commands. !deaths $(eval quotes = $(urlfetch json http://twitch.center/customapi/quote/list?token=FIRSTTOKEN&amp;no_id=1); deaths = quotes == “There are no quotes added” ? 0 : quotes.length; `Deaths so fa…