I downloaded the StreamTip Alerter, but doesnt open on my PC, help

Hey guys, I am new to these forums but not new to streaming or using the old Stream Donations service. Anyways, trying to get your new setup going and I cant get past downloading the Stream Tip alerter. Once its installed, I go to open it and get this:

nevermind, it wont let me put a gyazo image in the post to show you guys. but it says that StreamTip.exe stopped working for some unknown reason. i tried uninstalling, reinstalling, repairing, nothing is fixing it.

any reason why this is happening? please help me out, I have a large channel and really depend on having my donation systems setup.

thank you for the help so far, i tried to install microsoft .net frame work but it wouldnt let me as it said the system was already installed (I am a noob with this stuff sorry)

I am on Windows 8 (or 8.1 or whatever the newest version is). Could that be the issue, when trouble shooting it says its compatible with windows 7…

i reinstalled Microsoft C++ and didnt do anything, omg this is just the worst.

Navihawk, I have removed your post just to prevent confusion (those are for the visual alerts, not the downloadable app). Thanks for assisting anyways.

nevermind, it wont let me put a gyazo image in the post to show you guys. but it says that StreamTip.exe stopped working for some unknown reason. i tried uninstalling, reinstalling, repairing, nothing is fixing it.

Can you try redownloading the alerter? https://streamtip.com/dl/StreamtipAlerter_alpha6.msi is a direct link. It sounds like you grabbed a corrupted copy.

I uninstalled, then reinstalled the direct link you posted for me. but not working. it is still showing me this picture: 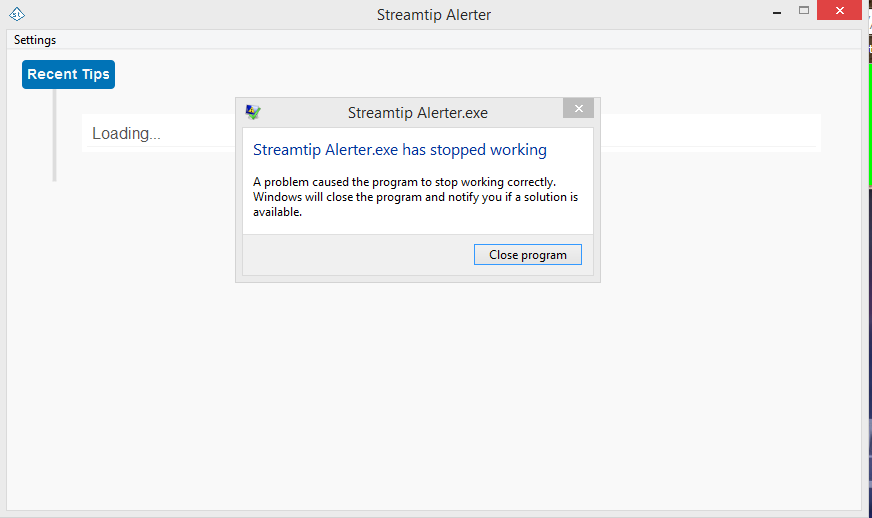 please help me out man, You can check my account. I get hundreds of donations a day, I am losing alot of revenue by this not working

Unfortunately for you I cannot reproduce any issues. As you can see the application does open, but then closes. Have you tried running the application in some sort of compatibility mode? You might also try reinstalling Windows. This application was packaged on Windows 8.1 Pro, and there should be no issues running it.

i tried running it in windows 7 compatibility, 8, etc…

I tried running it as an admin, no luck at all.

this sucks hard man. I had your old stream donations software working perfectly without a hitch, now this

this is literally the first and only program I have downloaded, and cannot get it to open and work. so surely it cannot be my version of windows that is messing up? I am only running on windows defender as a security setup, so its not being blocked either.

I wish I had an answer for you on why it doesn’t work, but I’m really not sure.

You do need the Visual Studio Redistributable for it to run, available at http://www.microsoft.com/en-us/download/details.aspx?id=5555 …but it should have installed that for you.

yeah already have all of that, this is just breaking my brain. No idea why its happening, and the few threads that had same issues as me have no responses or resolutions in them. fml

So is there no hope for me? Do I just use another service then? Will you guys be coming out with a newer version that might work?

You will need to be patient as we work through getting features completed. I have some plans for the application that should fix the issue, but there’s other things that are more important first.

would it still be possible to make the nightbot donation alert work, and pop up on screen? or do i need the program to make that work?

You do not need the Alerter app running for the visual alert to function. Setup your visual alerts here.

This topic was automatically closed after 61 minutes. New replies are no longer allowed.