I would like to see more options with emotes. I do not use most of the emotes available in there. I use the turbo emotes + my sub emotes, and maybe a handful of the global emotes.

It would be nice if we could choose which ones show up.

You can add emotes to your blacklist in the chat settings.

Oh. I don’t want to hide the emotes in the chat, I was just hoping for easier access to the ones I use on a regular basis. Just to hide some from view on the BTTV emote area.

there is a “popular” section that you can find emotes you use alot. As for a custom section to add your favorite/most used emotes, that doesn’t exist. 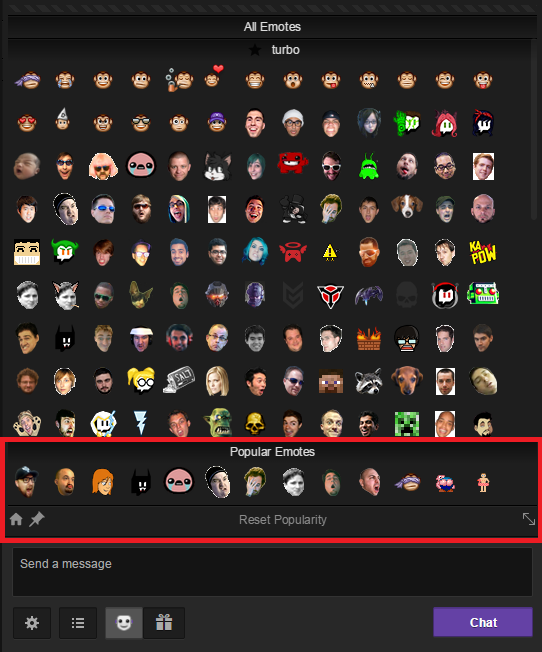 The popular section is handy, but what I would really like to see is custom section to add your favorite/most used emotes.

as i stated above, that currently doesn’t exist. You can submit features for BTTV here http://www.nightdev.com/contact/
pick BTTV and “To suggest a feature” Maybe Night or another NightDev can look into from your post here but they are super busy.

Both hiding AND “starring” emotes are already in the works. For the record, this emote menu is only included by BTTV as a helpful tool, not developed by BTTV. The issues for the emote menu on GH show the current known issues with the emote menu.

Hiding is already implemented (see #26), but is on the development branch.
The popular emotes will be replaced with “starred” emotes (see #22). At the moment, the starring capability is developed, but a separate section for it is not.

I am looking to push a new stable release this weekend with both features included, but it may take some time for BTTV devs to review and update it on their end. You can always get the latest stable version of the emote menu on it’s homepage, and should almost always be compatible with BTTV (just make sure the BTTV emote menu setting is off).

thank you sir, I was going to direct him to your Github but wasn’t sure if Night was updating yet or if we are just bypassing it for now. Thanks once again.

I have pushed out some updates to the dev branch. You can install the dev version if you’d like, just make sure to read about installing dev versions. Please let me know if you have any issues, errors, etc. Either reply here or use one of the contact methods at the bottom of the emote menu’s homepage.

Pending compatibility tests, this should be released to stable very soon.

cletusc, this is just about exactly what I was after! Thank you for the reply and the work put into this.

So far, it is working splendidly. The only thing I can think of that would help this more, would be to allow more Starred emotes. Currently we are limited to a single row of 8. Adding more will simply hide one of them, until you go down to 8 again.

If the starred section would expand if more than 8 were present that would be handy.

Absolutely. This is the very basic implementation. I am eventually planning on allowing you to sort the emotes manually, so having it expand as well should be pretty easy to implement. Although not ideal, you can also resize the menu yourself, which would expand it to more than 8, but that is only a workaround to see more.

This has been released to stable. You get the standalone now. Night will be reviewing compatibility of the change before he updates the BetterTTV copy. Full list of changes are on the v1.0.0 release tag.

This has been added to BetterTTV as of tonight.