I have two big playlists that I have imported to Nightbot, one from SoundCloud and one from YouTube. AutoDJ plays all the songs just fine, but the issue is when I skip tracks. This will cause the songs in queue to not play, and a message saying “no tracks found” will appear in the corner. To “fix” this, I click Playlist, then go immediately back to AutoDJ. The same song will usually play and the queue underneath is completely shuffled around from what it previously was, rendering the song skip useless.

EDIT: This happens regardless of the next song being from SC or YT.

I am using the Nightbot desktop app on an iMac running OS X El Capitan version 10.11.3 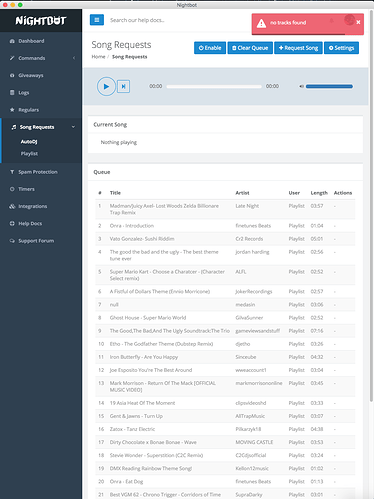 When a song in your playlist (greyed-out songs on the AutoDJ page) play, they are added to the queue transparently. Thus, this error should only occur if the song from the playlist does not exist in the playlist (which shouldn’t be possible).

With the desktop app, it happens 9 out of 10 times. I originally switched to the desktop app because this issue would happen from time to time on the website. So the error happens in both instances for me, but more often on the desktop app at this point. It wasn’t like this two weeks ago.

i have the same problem only it happens without skipping a song to and if i look at my personal playlist i see songs disepier i have 133 songs and than it changes to 64 or 30 and back to 133 so i think thats the problem pls fix this tis is sinds the new AutoDJ. system you put in it was working fine before

It seems some of the search instances are out of sync. I’m looking into it.

This should now be resolved. Let me know if you continue having issues.

Thank you, the error doesn’t come up anymore!