Hi, I have recently set up a Discord server and added Nightbot integration, but roles won’t sync to members.

I’ve put the Nightbot role at the top of the list on Discord and have assigned roles on settings within Nightbot to the correct roles within Discord. I also made sure to have “Role Syncing” ticked in Nightbot settings.

I asked my mods to join Discord first of all and they have linked their twitch accounts, but the Moderator role is simply not updating or being assigned to them. I have twitch subscribers assigned via direct discord/twitch integration but I plan to use automatic assigning for regulars too, so it would be really handy to have this solved.

Any help would be much appreciated! Thanks

Just did some testing in my test server and nightbot synced roles just fine. I asked a regular of mine to join and see how long it would take nightbot to sync after updating and within a few minutes or so it worked: http://i.imgur.com/7KNEKTP.png

Could you screenshot the discord integration page and maybe try turning it off, updating, then turning it back on and hitting update? Also nightbot should sync new members hourly or half-hourly i believe.

Yep did all that, both before and again now. Here’s the settings: 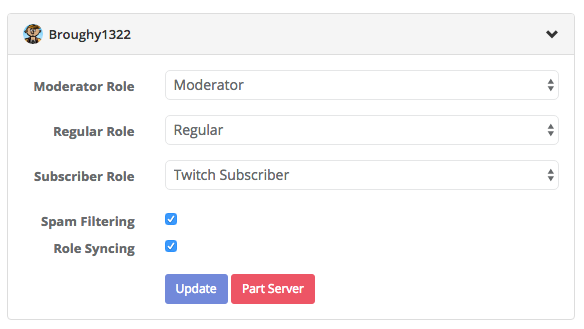 Nothing seems to make it sync correctly. Could it be that having the twitch integration with discord directly (for subscribers) stops it from working?

Could it be that having the twitch integration with discord directly (for subscribers) stops it from working?

No, that isn’t the case. The role syncing is working fine on a partnered streamer i moderate for. Nightbot is intended to function alongside it. Its rather odd that it isn’t working though, i can’t think of anything that would be interfering…

Syncing occurs every 15 for active discord servers (there is chat activity in a channel).

If no syncing is occurring, check to make sure Nightbot has Manage Roles permission on your server. If it doesn’t, it is not able to sync roles.

If mod syncing is not working, check if regular syncing is. Perhaps there is a bug in our Twitch mod syncing system if it’s only mods that do not sync.

Nope it’s not having it, neither mod nor regular syncing. Manage roles permission is allowed, and I’ve parted, disconnected, and rejoined etc for good measure.

I feel like it’s something dumb I’ve missed on my end but I can’t see what it is. I really don’t know why it won’t sync

Have since removed all connections between discord, twitch and nightbot and reapplied everything. Still no luck. I just don’t get it

Okay so regulars have now synced fine. Mods still haven’t. That’s seems to be where the problem lies. Can’t tell if subscribers synced correctly via nightbot given they were all synced via twitch integration with discord anyway, but at least we’re getting somewhere. Just the mods that won’t sync now.

I am fairly positive mods not syncing is a different issue, one affecting more than just yourself. Logs show a lot of errors grabbing mod lists from Twitch (Twitch doesn’t have an API, so we have to parse mods from their chat which is fairly unreliable). I will dive into this tomorrow.

Mods have now synced in the discord server. Whatever you did it worked

hopefully you found a permanent fix, thanks for looking into it!

Just FYI it’s back to not working (added another mod and nothing happened, though regular list updated). It’s not too much of an issue since adding mods manually isn’t a problem, but just wanted to let you know.