I am trying to create two custom commands, !arena and !match, for our SSBU and SSBM streams. If done right these two commands should work for any fighting game or game with a best 2 out of 3 / 3 out of 5 setup.

We want !arena to output the current Lobby ID and password when any user calls !arena.

We want !match to display the current match set score and the bracket position.

Example 1:
ttvuser: !arena
nightbot output: The current lobby ID is () and the PW is ().

Example 2:
ttvuser: !match
nightbot output: The current match is (bracket position) and the score is (x-x).

Note that !editarena requires 2 arguments in the user input in order to edit !arena. If the user input has less than or more than 2 arguments, Nightbot will still output a message indicating that it has edited !arena, but the command won’t actually be changed. The same goes for !editmatch which requires 3 arguments.

I am going to copy paste these in and try them now.

Thank you so much for a response Roketto, I appreciate it! I’ll let you know if I run into any issues with it 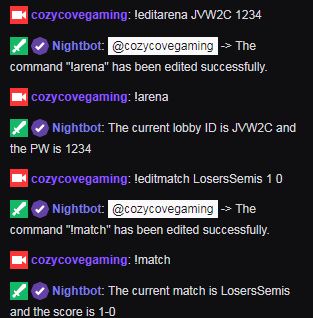 All of the accounts I have to log in and use are moderators - will non-moderators be able to access the editarena / editmatch commands that were listed? Not a huge deal if they can, I’ll just make sure to enter commands outside of chat

Thank you! You’re the man!