BTTV not showing the chat history

When i open up a stream, my whole chat is empty and after about 10 seconds or longer i get the message “BetterTTV v6.8 Loaded.” Wich before came immediatly up in chat. So it’s not showing the last few lines of chat before i entered the chat either.
Using google chrome Version 47.0.2526.73 m
Tried reïnstalling it but it did nothing to fix it. 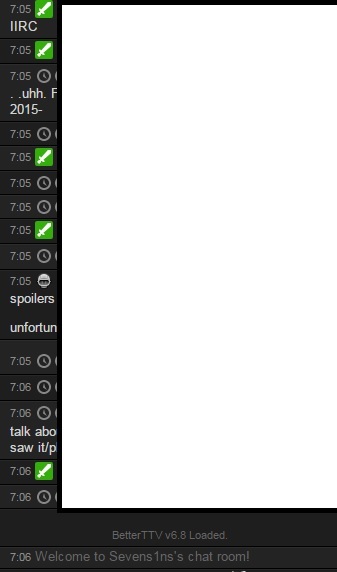 BTTV.jpg337×572 21.6 KB
Took this many lines after i got the Loaded message in my chat.
Tried the debugging post suggestions aswell and nothing came out of that either.
Only other extensions are FFZ and Adblock Plus but disabling those did not help
Thanks in advance
night December 6, 2015, 7:13pm #2

The virtual server responsible for handling this appeared to have locked up. We rebooted it and it appears to be functioning normally now.

I can confirm that it is working now! Thanks for the fast response.

Currently I’m not seeing any history chat at all, is this related?
BTTV is instantly loaded but, even the ‘bigger’ streams with an active chat at the moment, show 0 history.