When you released the NightBot desktop Beta, the AutoDJ played spotify jsut fine without any huge problems. After few weeks, it just stopped working.

It will import the playlist just fine, but when i try to play one song, it gives song lenght of 0:00 and does nothing.
After i tried everything i found from these forums and googling, problem still exists. I have tried uninstalling both spotify and nightbot, i have ran thru spotify setting many times (No crossfading, allowed control over the web, no mixing the playlist and no looping). Spotify is in online mode all the time and i have tried opening it before and after nightbot. I have tried bot software as admin

It just shows up like this in the nightbot and nothing happens. 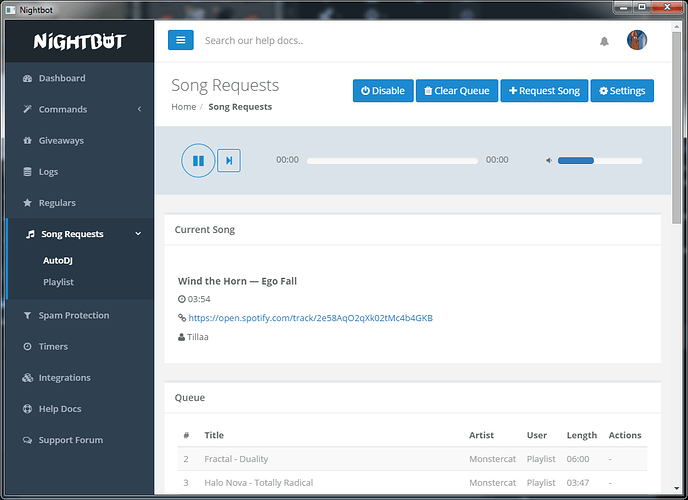 Try closing both the application and Spotify completely. Then re-open Spotify followed by the Nightbot app. If you open the Nightbot app before Spotify, it tends to not connect properly.

I have tried that too, tried it again. Doesn’t work. Killed all the processes.

Make sure you have this setting enabled in your Spotify settings:

That setting is the way you show in the picture.

Then unfortunately I don’t have a solution for you, sorry. You might try reinstalling Spotify and/or messing with firewalls you might be running. If the Nightbot app cannot connect to Spotify there’s not really a solution here.

I have tried all those too :< Unblocked both from firwalls entirely and reinstalled both.
It started after spotify updated, could it be like it can’t find the spotify from my pc because of that if it is searching for the older version?