Able to link betterttv to discord, no emotes show

I orginally had betterttv in a very large server I was an admin of (5k+ members). It worked fine, I met the requirements and everyone enjoyed the emotes. Some time goes by and I unlinked betterttv from the server and wanted to add it to a smaller one that revolved my friends and my twitch channel. It did not work, that’s when night told me my account might have gotten flagged or something like that.

I live streamed more often each day and got over 20 viewers each time and was able to finally link betterttv to my discord server. It linked and I thought everything was fine. I then noticed there were no emotes there, betterttv was in my server but no emotes appeared.

Is it possible to fix this? I did cancel my pro subscription temporarily until I’m able to get them back, so I don’t know if that has to do with anything.

I tried again and double checked everything, making sure I didn’t uncheck anything. 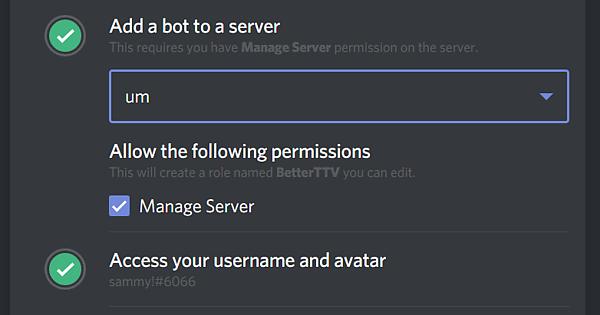 While trying to fix this problem for a while, my subscription ran out. But I should still have 5 I think

The bot is not in your server, despite our app thinking it is. If you banned it from your server, this can happen.

Tried to re connect it today and it wont allow me.

“Heh. Sorry, but your account is not eligible to link Discord. You must be a partnered Twitch broadcaster, have 1,000 Twitch followers, or stream an average of 3 times per week with at least 15 viewers.”

I could do it before and I know for sure I met two of those requirements (when you only need one), I haven’t live streamed this week due my busy schedule. I tried incognito and no luck as well

If you became ineligible then you would not be able to relink until you become eligible again, sorry.

Honestly feel like I’m running around in circles at this point.

Honestly feel like I’m running around in circles at this point.

I would suggest working to grow your Twitch channel, as being on the edge of our requirements is bound to cause this issue to happen when your channel numbers fluctuate.